by Ashley Gerlach on October 3, 2020 in Technology News

Few phrases capture the zeitgeist of higher education in 2020 better than “Zoom University.”

In the space of just a few months, thousands of students joke that they have transferred to Zoom U — some even opting to make it “official” with the purchase of an unofficial sweatshirt.

Zoom’s videoconferencing platform has become synonymous with remote instruction during the pandemic. But Zoom was not designed specifically for educational use. ClassEDU, a start-up created by Michael Chasen, former CEO and co-founder of Blackboard, aims to change that.

ClassEDU announced last week that it has raised $16 million in seed funding to develop Class for Zoom — a Zoom add-on that will give educators new features such as the ability to take class attendance, get data insights into student participation and issue interactive quizzes during class.

Instructors will even be able to monitor the tabs that students open while in exam mode, making the software a potentially powerful proctoring tool. They can also control whether or not students can see each other and have the option to record lectures without showing any student faces. Currently, recording Zoom lectures could violate privacy laws, particularly if institutions record students’ faces without permission.

When his three school-aged children started Zoom classes in the spring, Chasen noticed that his children’s teachers started to cut down Zoom class time to just a few hours per week. This semester, that dropped to just an hour per week, with teachers mostly assigning work to be completed in students’ own time.

Worried that his children and others would fall behind, Chasen began asking teachers why they had reduced their Zoom use. He heard that in a typical face-to-face class, teachers do much more than just lecture at students — they ask questions, they have one-on-one conversations, they give out quizzes and they facilitate group discussions. Those activities are not easy to do via Zoom.

Zoom is an excellent product that has become the de facto standard for educators delivering synchronous learning, Chasen said. But the product has limitations for educators.

“There’s a lot of fundamental challenges with the way that teachers are trying to engage with students online,” Chasen said.

He set out to create a solution. With some added functionality, teachers might be able to do much more teaching through Zoom.

“I took my knowledge of e-learning and how to build extensions on top of existing products, and we designed an add-on to Zoom that gives teachers all of the capabilities they have in the physical classroom to use online,” Chasen said.

Class for Zoom is scheduled to become available on computer and mobile devices by the end of the year, but pricing for educators has yet to be decided. Chasen said he wants the product to be affordable enough that it “gets in the hands of as many teachers and students as possible.”

The marketing for Class for Zoom makes clear that ClassEDU is targeting the K-12 market first and foremost, said Joshua Kim, director of online programs and strategy at the Dartmouth Center for the Advancement of Learning and an Inside Higher Ed blogger.

Plenty of crossover demand exists between features that K-12 teachers and college instructors want from Zoom, said Chasen. But his team of developers is looking to gather feedback from higher ed practitioners and are working to make Class for Zoom compatible with large college sections, he said.

Zoom encourages the development of plug-in apps designed to enhance the experience on the videoconferencing platform, Chasen said. So while Zoom itself may be focused on improving its core product instead of meeting the needs of a large number of different users, a marketplace of apps to meet more specific needs has sprung up.

A spokesperson for Zoom said the company is listening to the needs of educators and making changes to its core product accordingly.

“Some of Zoom’s very first customers were higher education institutions that helped to shape Zoom early on and we continue to engage with our customers for education enhancements across all our products and services — Meetings, Webinars, Zoom Rooms, Zoom Phone and Chat,” said the spokesperson in an email. “We have a deep commitment to building our education vertical including our education partnerships like ClassEDU and have brought in industry veterans like Anne Keehn, Zoom’s Global Education Lead and Tain Barzso, Education Product Development Lead in support of our education efforts globally.”

Zoom does not share how many higher education institutions use its platform but says it is used “by the majority of institutions in the U.S.”

Earlier this year, uninvited guests were crashing virtual classrooms and disrupting teaching in incidents dubbed Zoombombing. In response, Zoom introduced a waiting room feature that allows instructors to admit only students expected to join the class.

Zoom has since focused on improving collaboration and accessibility in the platform for educators.

“For in-meeting collaboration, we’ve doubled down on breakout rooms with the ability to create themed rooms and allow students to self-select the rooms they wish to enter,” said the Zoom spokesperson in an email. “For accessibility and increased interactivity, we’ve introduced the ability to pin and spotlight up to 9 participants, as well as rearrange the gallery view as one sees fit.”

If an instructor is dropped from a meeting, Zoom has developed a feature that automatically sends all students to a waiting zoom. The company plans to add more features to breakout rooms and improve overall security and interactivity in the near future.

While Zoom has become a popular tool for remote instruction, some experts worry its widespread adaptation comes with drawbacks. Kelvin Bentley, vice president of learning strategy for Six Red Marbles, a company that develops educational content for schools, higher education institutions and publishers, worries that improvements to the platform will enable instructors to continue teaching as they would if they were in a face-to-face setting, rather than embracing online pedagogy and finding better ways to engage with students remotely.

Zoom can play a useful role in making sure students can access faculty office hours, for example. But it isn’t the best tool for teaching full-time since it promotes one-sided interaction, Bentley said. He questioned whether higher education institutions would pay for additional features in Zoom after many turned to the service in the spring because it was a low-cost option without a significant learning curve.

Interest in Class for Zoom will probably be driven by how much an instructor or school uses the synchronous modality for teaching, as well as their pedagogical philosophy, said Jennifer Paloma Rafferty, director of the Institute for Professional Development at the Online Learning Consortium, in an email.

“I don’t think that Zoom is restrictive if instructors have the proper training and support to leverage the features of the tool for their pedagogical goals,” Rafferty said. “Some of the biggest hurdles instructors face in a synchronous environment are not feeling comfortable with being on video and not fully understanding how to best employ features like white boards, polls and break out rooms.”

Jennifer Paloma Rafferty, director of the Institute for Professional Development at the Online Learning Consortium, shares her advice for educators who want to improve their online teaching.

Fred Singer, CEO of Echo 360, a video capture platform designed for higher education, said in the long term he continues to see a role for Zoom and other videoconferencing tools such as Google Meet or GoToMeeting. Universities will continue to need a learning management system, a videoconferencing tool and a more sophisticated tool for recording video lectures, he said.

Some learning management systems have found ways to integrate videoconferencing tools for synchronous instruction into their platforms rather than creating their own, because a lot of money and investment is required to develop a videoconferencing tool such as Zoom, said Singer. The Blackboard learning management system does offer integration with Zoom, but has also developed its own video instruction tool called Blackboard Collaborate, which offers tools for both asynchronous and synchronous instruction.

Zoom and video tools that were designed by educators for educators, such as Echo 360, will still cater to different market needs, even with increased functionality for educators in Zoom, said Singer.

But there is room for innovation, too, said Narine Hall, director of the data science program at Champlain College, a private nonprofit college in Burlington, Vt. Unable to communicate with her students in the way that she wanted to via Zoom, Hall recently co-founded InSpace, a new kind of videoconferencing platform designed to make interactions between students and faculty online more interactive and organic.

Rather than arranging online class attendees in a rigid grid, InSpace users have the freedom to roam around a virtual environment with a small circular avatar. This environment can be customized to meet the needs of an instructor, but Hall likes to keep it simple with a picture of the Champlain College grounds.

Developed in just a few months, Hall and her team have been furiously coding to create a beta version of InSpace that Champlain College and several other institutions will try in the coming weeks. The university recently awarded InSpace $50,000 to run a pilot program and cover its cloud computing expenses.

One of InSpace’s most distinctive features is the way it uses sound. When users move their avatars close to each other, they can clearly hear each other talking. If one user moves away, they will no longer be able to hear the other person. Instructors can override this feature, making their voices audible from any point in the space.

When Hall shows people the platform, they often remark that the idea is remarkably simple. But being able to move around makes online interactions between students and instructors much less awkward, she said. As Hall delivers a lecture, for example, students who want to ask questions might move their avatar closer toward the lecture slides to indicate they have something to say.

She has noticed that when students are starting to lose focus, they might fidget and move their avatar around — a visual cue that Hall would be able to spot in the classroom but that can be lost when teaching online. 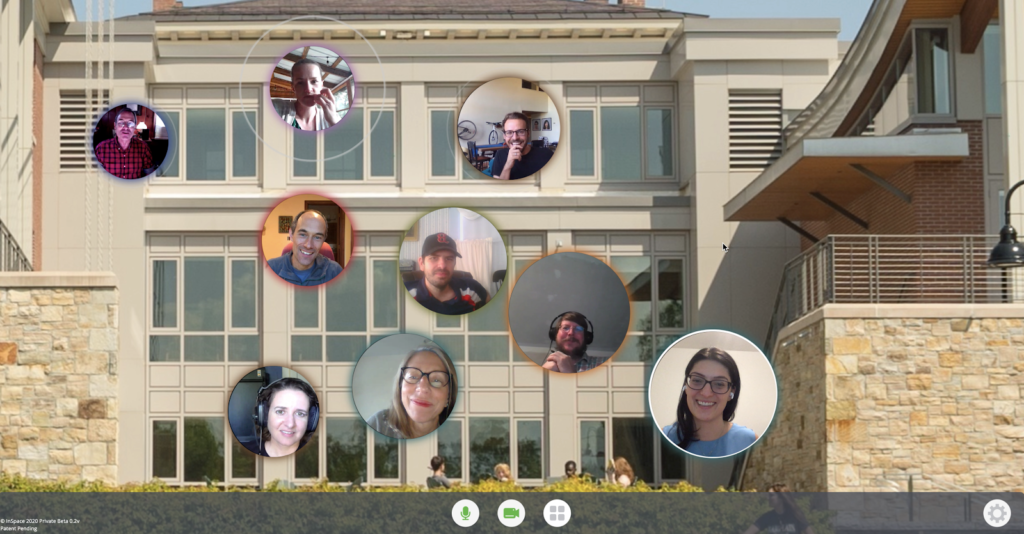 One of Hall’s biggest frustrations with Zoom was that as an instructor, she couldn’t easily move between breakout discussion groups. With InSpace, Hall can create multiple breakout rooms, which appear as squares on the screen. Move your avatar inside the box, and you can hear the conversation that takes place inside it. Move outside the box, and you can no longer hear the group.

“Everyone has a different idea of how they want to use it,” she said. Right now, Hall and her colleagues are working on ways to improve the platform’s accessibility and ability to transcribe what is said aloud.

As instructors begin to test InSpace, Hall is excited to add new features. But her priority is that the platform stays intuitive and easy to use — and, importantly, fun.